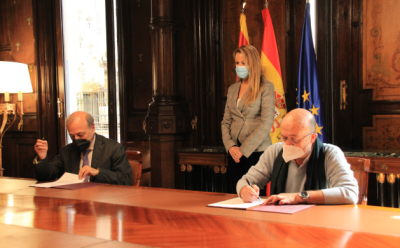 For the third consecutive year, the two entities have signed a collaboration agreement to continue the Actions for New Musicians project.
- The signing took place on March 1, at 12 noon, at the Government Delegation in Catalonia.
- The project aims to promote the emerging talent of Taller de Músics.
- It will have seven specific actions that will promote creating spaces with leading artists and encourage the participation of young musicians in the professional music circuit.
- Emerging musicians will have the opportunity to work with artists such as Salvador Sobral and Sebastian Studnitzky or under the direction
artist of the Barcelona Art Orchestra (BAO).
- For the second year, the Talent Prize will be awarded to the best project presented at the ninth edition of this festival.
- To promote mobility, musicians will be able to attend Jazz à Vienne, Fara Music Festival, Jazzahead! and Babel Sound.
- As a novelty, two co-productions will be created for the Lomotive Jazz Festival and the X-JAZZ! festival.

Taller de Músics and Acción Cultural Española (AC/E) renew their collaboration agreement to carry out the third edition of the Actions for New Musicians project, which aims to promote the creation and international career of talented artists from the Taller de Músics community . The signing ceremony of the agreement took place on March 1, at 12 noon, at the Government Delegation in Catalonia. Mr. José Andrés Torres Mora (president of AC/E) and Mr. Lluís Cabrera (founder of Taller de Músics) attended. The act has been chaired by Maria Eugènia Gay, Government Delegate in Catalonia.

In the different actions, the young artists will be selected through open calls and, in the case of the Talent Award, through a specialized jury that will evaluate all the proposals.

Actions in detail:
Firstly, there will be a digital creation and promotion action focused on jazz and alternative music. It will be led by the Portuguese singer and musician Salvador Sobral accompanied by the producer and composer Leo Aldrey. This work space will be a unique opportunity to learn first-hand how Sobral and Aldrey work and create and record a song together. In addition to working in a recording studio and making a video clip, you will be able to learn what digital distribution entails.

In parallel, a creation and promotion action will be carried out focused on author songs and flamenco rhythms with an artist who will be confirmed soon. The goal is to create a show that will fuse flamenco with other genres such as rock and jazz. The selected musicians will work in artistic residency with the leading figure and, finally, they will present the project in public on different stages.

There will also be two creation, co-production and promotion actions between Taller de Músics and two festivals: Locomotive Jazz Festival and X-JAZZ!. The first will consist of the creation of a show that will fuse taranta (traditional Italian music) with flamenco, based on jazz music and with a clear experimental vocation. It will be made up of Italian and Spanish musicians. On the other hand, a co-production and residency will be promoted with Sebastian Studnitzky, director of the X-JAZZ! festival, with a rehearsal period, which will result in a show that will be presented as part of the 4th edition of the international jazz meeting JAZZ I AM.

There will also be a creation, composition and premiere action, under the artistic direction of the Barcelona Art Orchestra (BAO), made up of Néstor Giménez, Joan Vidal, Lluc Casares and Lluís Vidal. The musicians will share their compositions and work on them so that they can later be presented at the Talent 2022 Festival. Precisely, within this festival, a showcase for new talents and musical proposals, one of the other actions is framed. This is the Talent Award, where a jury will choose the winning project that will be able to rotate through different rooms.