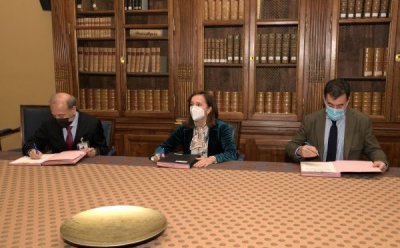 The BNE, the Xunta de Galicia and AC/E sign a collaboration agreement for 2021

Madrid - 01 December 2020
Acción Cultural Española (AC/E) has signed today with the Xunta de Galicia and the National Library of Spain an action protocol for the development of coordinated and common cultural activities in 2021.
The purpose of this protocol is to express the will of the parties to collaborate in the development of lines of action and the realization of cultural programs on Emilia Pardo Bazán (1851-1921), within the framework of the celebration of the first centenary of her death, and the Jacobean Holy Year of 2021.
The signing was attended by: Román Rodríguez González, Minister of Culture, Education and University of the Xunta de Galicia; Ana Santos Aramburo, director of the BNE and José Andrés Torres Mora, president of AC / E.
Likewise, it has been agreed to create a monitoring commission made up of the General Secretary of Culture of the Xunta; by the Director of the Cultural Division of the National Library of Spain; and by the Programming Director of Acción Cultural Española, whose mission will be to plan and monitor the cultural actions that will be carried out by the different institutions, both at the BNE headquarters in Madrid and in the different places managed by the Government of Galicia.