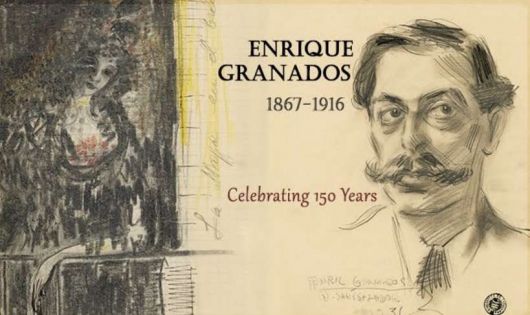 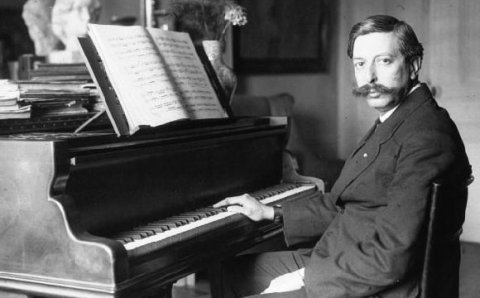 Commemorations
01 January - 31 December 2016
Enrique Granados (1867–1916) died in on his way back from the United States following the performance of Goyescas at the Metropolitan Opera on 28 January 1916. The passenger ferry in which he was travelling to England, the Sussex, was torpedoed and damaged by a German U-boat. Granados and his wife were drowned.

To mark the centenary of his death, AC/E is organising an extensive music programme in conjunction with leading music festivals and other cultural organisations in order to disseminate the oeuvre of the brilliant Spanish composer more effectively and in a unified manner.

Enrique Granados y Campiña had a Cuban father and a Galician mother. His musical talent became evident during his childhood. He studied elementary theory and practice in his city of birth with José Junceda. When still a boy he moved to Barcelona and enrolled at the school of La Mercé directed by  Francisco Jurnet; he was later taught by Juan Pujol (piano) and Felipe Pedrell (harmony).
He began to give public concerts at the age of ten. In 1887 he moved to Paris, where he studied with Bériot and lived with his pianist friend Ricardo Vinyes. In 1889 he returned to Barcelona, where he performed a memorable concert at the Teatre Liric. In 1892 he secured further success as a concert performer and as a composer with his first three Danzas.
As a pianist he excelled at accompanying great violinists such as Manén, Isaye, Crikboom and Thibaud. He also performed publicly pieces written for two pianos alongside Risler, Saint-Sáens and Malats. He won first prize in one of the first Festes de la Música Catalana; his Allegro de Concierto likewise won an award in a national contest.

In 1910 he sent his compositions for piano, entitled Goyescas, to pianist Montoriol Tarrés, who lived in Paris. Tarrés studied the work and was delighted with it. He showed it to others and soon, enlisting the support of Viullermoz, he persuaded the Société Musicale Independante to organise a concert fully devoted to Enrique Granados on 4 April 1914. As a result of this concert, Granados was awarded the Legion of Honour and was commissioned by Rouché, director of the Paris opera, to convert the Goyescas into an opera to be performed in Paris.

Enrique Granados set to work and finished the score based on a libretto by F. Periquet; however, the world war broke out and the project could not be feasibly continued. Given this state of affairs, the New York publisher Schirmer, learning of the difficulty, rapidly made a proposal to Granados: he was willing to publish the work and have it performed in New York. Granados accepted and travelled to America with his wife.
The performance of Goyescas at the Metropolitan Opera on 28 January 1916 was a success and Granados was invited by the US president to play at the White House. As a result the composer missed the liner on which he was due to return to Spain. After honouring his commitments, he preferred to travel to England rather than wait for another Spanish boat to depart. At Folkestone he boarded the Sussex, which shortly after setting off was torpedoed and badly damaged by a German submarine. Granados and his wife drowned. The news caused a sensation and posthumous tributes were organised in Barcelona, Lérida, Paris and New York.
As well as the abovementioned works, Granados also composed the following, among others: Bocetos, 12 Danzas españolas, Piezas sobre cantos populares, Valses poéticos, Madrigal, the opera María del Carmen (1898), Follet, Picarol, Liliana (based on texts by Apel·les Mestres), a new series of Danzas españolas, Sardana, Rapsodia aragonesa, El Pelele and El canto de las estrellas (for piano, choir and organ).
Enrique Granados was also a remarkable teacher: many of the finest Catalan pianists of the day studied at the music academy in Barcelona that bore his name. He was an outstanding performer of Spanish folk music, which he imbued with his keen poetic sense and sharp intuition.

"Love and Death" is a documentary based on the life of the Spanish composer Enrique Granados and is produced by López-Li Films and RTVE, with the collaboration of the ICAA, of the Community of Madrid, Acción Cultural Española (AC/E) and Ibermúsica. In it, music performers such as Rosa Torres-Pardo, Evgeny Kissin, Cañizares, Arcángel, Rocío Márquez, Carlos Álvarez and Nancy Fabiola Herrera
View Activity
Music

Granados, from Paris to Goya

The exhibition, curated by Joaquim Rabaseda, commemorates the 150th anniversary of the birth of the composer and pianist Enric Granados (Lleida, 1867 - Canal de la Mancha, 1916) through the musician's life and work, from the capital of France as a young scholar to the last compositions inspired by Goya. For years, Granados personally and professionally met with different artists in Barcelona
View Activity
Music

Since 2006, Amadeus Arte organizes the LakeComo Festival, a series of concerts in intimate spaces within the beautiful villas and gardens overlooking Lake Como, in the historical town of Como and in selected villas and theaters of Brianza region. The Festival has always programmed side by side classical repertoire and new music developing itself in balance between tradition and innovation. Always
View Activity
Music

AC/E supports the concert of José Manuel Dapena at 8:00 pm, Saturday, 8 April 2017 at Capital University’s Huntington Recital Hall, Bexley to conmemorate the 30th Anniversary of Andrés Segovia (1893–1987) and the 150th Anniversary  of Enrique Granados (1867­-2017). Critics have noted José Manuel Dapena as “a talented guitarist and an artistic proponent of the Spanish culture,” “a great Spanish master of
View Activity
Music

This year is the 150th anniversary of the birth of the great composer Enrique Granados, and AC/E is supporting several cultural events designed to help people rediscover and appreciate his contribution to music. They include several concerts scheduled for this season (spring 2017) at the Municipal Auditorium of Lleida to celebrate  Granados year: Granados: Dances, waltzes and transcriptions. José Menor Friday, 17
View Activity
Music

The Symphonic Orchestra of the University of Sao Paulo, with the collaboration of AC/E, is organising a concert with the prestigious Spanish conductor Alexis Soriano to celebrate the 150th anniversary of the birth of Enrique Granados.  Alexis Soriano is one of the most prominent orchestra conductors of his generation. A student of Ilya Musin at the St Petersburg conservatory, he was
View Activity
Music

Cadiz Spanish Music Festival sets out to analyse and disseminate the values of Spanish music. During the month of November, the festival brings together musicians, composers and researchers for the main purpose of fostering Spanish creation in connection with universal music and, more specifically, with Latin America.  Acción Cultural Española is supporting the activities scheduled to mark the first centenary of
View Activity
Music

Its broad range of performances and academic and educational events has secured FIMTE a foothold as one of the most prestigious showcases for Spanish students and performers of keyboard music, as well as a reputation as one of the most important annual Spanish music celebrations. For the 17th edition of the festival, AC/E is supporting the programme devoted to the Enrique
View Activity
Music

The 65th edition of Santander international festival features a packed programme of 44 shows, including symphonic and baroque music concerts, dance performances, recitals, chamber and early music concerts and family shows as well as concerts in historical settings. Until 31 August audiences can enjoy the performances held both in the Palacio de Festivales of Cantabria, the main venue of the
View Activity
Music

San Sebastián musical fortnight is Spain’s oldest classical music festival and one of the longest-standing in Europe. It was established in 1939 on the initiative of local traders and hotel and catering entrepreneurs. Since its beginnings, musical fortnight has enjoyed great prestige on account of the quality of its programmes and the reputation of its performers. The programme devised for the
View Activity
Music

The Torroella de Montgrí Music Festival started out in 1981 with a small number of concerts held in the medieval town centre. In 2015 were held a total of 713 concerts and an attendance of more than 395,000 spectators. Over the 34 years of the Festival have passed through its stage the best soloists, orchestras, ensembles of early music and choirs
View Activity
Music

From 15 to 26 July, Segovia will be filled with music. People will have the chance to discover gems of chamber and symphony music and enjoy concerts with Latino music, zarzuela, fado, flamenco and even barbershop music. It offers an eclectic programme for a varied audience. Nearly twenty concerts will be held in 10 historic venues over a 12-day period. Segovia
View Activity
Music

Granada’s international music and dance festival originates from the symphonic concerts first held in 1883 in the Palace of Charles V during the Corpus Christi festivities. Since 1952 the festival has been one of the most emblematic and attractive cultural events of Granada. It takes places from June to July in the palaces of the Alhambra and in the city’s
View Activity
Music

From Barcelona with Passion: Enrique Granados in New York

Enrique Granados (1867–1916) spent his last months in New York. This stay in the city marked several of the most successful moments in his career: the premiere of his opera Goyescas at the Metropolitan Opera in New York and a recital at the White House. Granados tragically died only days later in the English Channel when the ferry he was travelling in
View Activity