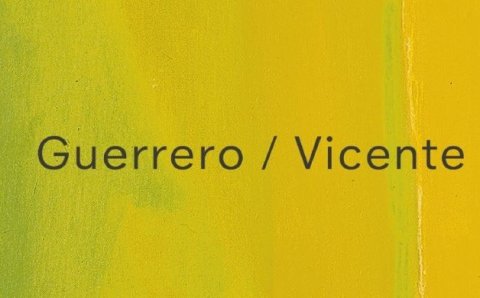 The Centro José Guerrero in Granada and the Museo de Arte Contemporáneo Esteban Vicente, with the institutional support of Acción Cultural Española as the organiser and the collaboration of the Museo de Bellas Artes de Asturias as the venue, present an exhibition project that links the work of the only two Spanish artists who were part of one of the most important art trends of the twentieth century: American Abstract Expressionism. The exhibition “Guerrero / Vicente” highlights the similarities and differences between two artists whom historiography has traditionally treated individually and separately given their powerful artistic and stylistic personalities.

Their formative periods are marked by a number of similarities. Esteban Vicente was born in 1903 and José Guerrero in 1914; therefore, until the central years of their careers, Vicente was always ahead of Guerrero. But they moved in the same environments. They both studied at the Escuela de Bellas Artes de San Fernando. After completing their academic training, they both headed for Paris, then the hub of European avant-garde art. They were both particularly attracted to Matisse, but also to Cubism and the Paris school. They each married an American woman and went to live in the United States, Esteban Vicente in 1936 and José Guerrero in 1949, both as a result of wars. They had started out practising a new representational art that gradually shifted away from mimesis and towards abstraction.

For both artists the turning point, the year that marked a change in their artistic language, came in 1950. The most important event in Esteban Vicente’s life was the Talent 1950 exhibition for which he was selected by Meyer Shapiro and Clement Greenberg. That year José Guerrero took up residence in Greenwich Village, where there was a large colony of artists, and began to have dealings with agents, who soon introduced him to the gallery owner Betty Parsons. Each with their particular likes and dislikes, they mixed with De Kooning, Rothko, Kline, Motherwell, Guston, Newmann and Pollock, among others, and from then onwards remained faithful to the dictates of the first generation of American Abstract Expressionism.

Despite their stylistic differences, they both shared the same concern with colour. In Guerrero’s case, it soon became a structural element of the composition. Vicente took longer: his initial concern was the structure of the painting, but in the late 1950s he began to explore how to trap or capture light and achieved this through colour, which also infuses his work with emotion.
The works selected for the exhibition, which illustrate their parallel careers, focus on three significant stages in their shared journey:
-Their beginnings in representational art, with a selection of their respective landscapes, the genre they most practiced: urban and rural scenes in which there are glimpses of a progressive shift towards abstraction.
-The early 50s, marked by a complete, determined espousal of abstraction with no turning back. A determining factor in both cases was their explorations on paper: collage (in Vicente’s case) and printmaking (in Guerrero) were experimental laboratories that allowed them to progress until they felt confident in this new direction.
-The 70s, after which they each developed a characteristic voice of their own and achieved full maturity, leading to different approaches to colour field painting. José Guerrero attached great importance to space, its limits, the boundaries between planes, and the areas where colours intermingle; to quote Juan Manuel Bonet, what interested him “was for colour to flow, for the paint to breathe, for the picture to be vibrant, luminous and full of energy”. During these years Vicente built a world of his own based on forms that float in space and give meaning to his work and in which he obsessively worked on colour gradation and saturation and, through it, light.

The accompanying exhibition catalogue features a main text by Inés Vallejo, who examines the exhibition from an academic, historical and scientific approach based on the research she carried out for her doctoral thesis (Esteban Vicente y José Guerrero: dos pintores españoles en Nueva York, UCM, 2010). The publication will feature three introductory texts on each of the sections into which the show is divided, written by three important Spanish historians and critics: Juan Manuel Bonet, Guillermo Solana and José María Parreño.
Read moreRead less
Watch and listen 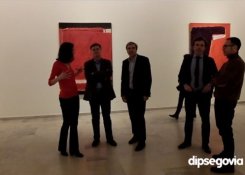