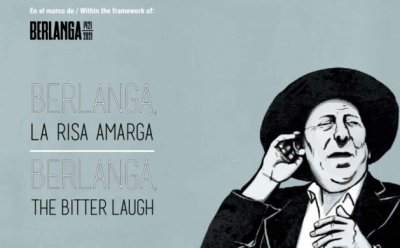 ICAA, Instituto Cervantes, AC/E and AECID come together to publicize the work of Luis García Berlanga outside of Spain

Madrid. - 08 September 2021
· The cycle "Berlanga, bitter laughter" consists of 8 films and will travel around the world in autumn.
· The sample is accompanied by a notebook in which current filmmakers such as Fernando Trueba, Chus Gutiérrez or Alexander Payne present each film.

ICAA, in collaboration with the Instituto Cervantes, Acción Cultural Española AC / E and AECID launch “Berlanga, la risa amarga”, a cycle whose objective is to bring the work of the Valencian director to the halls of cultural centers and film libraries throughout the world. The exhibition, which is made up of eight films, covers five decades of Luis García Berlanga's creation, from his beginnings as a film student with El circo (1949) to La vaquilla (1985).

Although some of the films have already been screened on stages such as the Transilvania International Film Festival, the show will reinforce its presence from September 24, when it can be seen at the Cultural Center of Spain in Panama. After this stop, you will travel throughout the fall to Luxembourg, Tunisia, Bolivia or Beijing, among many other places.

The cycle includes a notebook made up of texts written by current filmmakers that contextualize the selected films. Chus Gutiérrez opens the brochure, who writes about El circo: an 18-minute short film that García Berlanga directed in 1949 during his stay at the Institute for Cinematographic Research and Experiences. For her part, Inés París reviews That Happy Couple (1951), a film recently restored by the Spanish Filmoteca whose end-of-production date, October 6, has been chosen to celebrate Spanish Cinema Day. Neither could well miss Mister Marshall (1953), “a bitter satirical comedy”, as defined by María Cañas, who claims Berlanga's cinema as “a breath of fresh satire: caustic, sly, irreverent, iconoclastic, unique”.

On the other hand, while Mar Coll writes about Calabuch (1956), Fernando Trueba writes about Plácido (1961), in a text in which he assesses the possible reasons that have prevented the international recognition of Berlanga and that coincides with the reflection on this question that Alexander Payne makes in his text on The Executioner (1963). Completing the exhibition National Heritage, a 1980 film that Miguel Albaladejo talks about, and La vaquilla (1985), in whose review Borja Cobeaga claims humor to get closer to reality.

In addition to accompanying the sample in printed format, the notebook is available in a digital version for download on the websites of the Filmoteca Española, ICAA, Instituto Cervantes, Acción Cultural Española AC / E and AECID.
Activities

Subscribe to our newsletter View latest newsletter
Thank you for your registration. For security reasons, we have sent a message to the indicated email; please confirm it by clicking the button "Activate service"