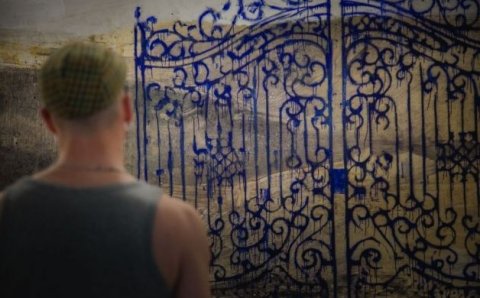 Street exhibition
( Segovia, SPAIN )
29 June 2020 - 23 April 2021
#InsurrectaBorondoSG | This project by the artist Gonzalo Borondo, organized by the Segovia City Council in collaboration with Acción Cultural Española, is part of the activities that the City Council carries out in commemoration of the V centenary of the Comuneros revolt.

Insurrecta aims to generate a freely accessible urban route, using the billboards of the entire city of Segovia as a support, which turn the city into an open-air museum. Borondo conceives the project as a cultural initiative available to citizens, extolling the value of the natural landscape and placing the "NoLugares" on the tourist plane. The 32 works, spread over 17 locations, are divided into 5 chapters, suggestively spinning historical events with a personal and critical reading of the artist towards contemporary times.

Gonzalo Borondo (1989)
Borondo returns to Segovia, the city that saw him grow, at the end of 2019, after a fruitful professional career developed outside of Spain, which has led him to exhibit in museums, festivals and other institutions around the world. His projection of contemporary art in public spaces tries to break down the barriers between art and life, questioning the limits of the cultural heritage of the context, while paying him a respectful tribute.

Borondo's work is the result of a powerful dialogue between his art and the spaces in which it is located. His most recent projects include the intervention in the Temple of Chartrons, in Bordeaux, within the framework of the Liberté! 2019, his interventions at the Contemporary Museum of Rome (2018-2019), at the Musiques Interdites Festival in Marseille, in Berlin (Urban Nation Contemporary Art Museum), and at the Altrove Festival (Italy), among many others. He has starred in solo exhibitions in Madrid, Paris and London and has murals in Kiev, London or Las Vegas.
Read moreRead less
News

14 July 2020
'Insurrecta' commemorates the rise of the nobility of the two Castillas against the power of the crown. A crown recently placed on the temples of Carlos I, a 16-year-old boy, born in Holland, who barely spoke Spanish and who toured the peninsula collecting funds for his imperial project.
Leer

01 July 2020
The capital commemorates the 500th anniversary of the commencement of the community revolt in Segovia with the open-air macro-exhibition 'Insurrecta' by Gonzalo Borondo, with which the artist reinterprets the anniversary and invites citizens to reflect on it...
Leer