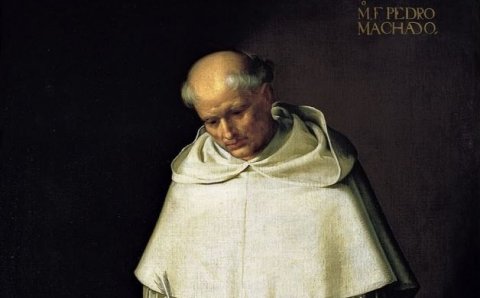 The 'obra convidada' is one of the most anticipated activities of Mostra Espanha and also the one that arouses the greatest expectation and attracts the greatest number of visitors. This programme run by the MNAA is intended to make known works by great masters of western painting from prominent museums and collections but rarely exhibited in Lisbon. On this occasion the chosen work is "Fray Pedro de Machado" by Zurbarán (oil on canvas, 1630-1634), from the Royal Academy of Fine Arts of San Fernando.

On August 29, 1628, Zurbarán signed a contract with the friars of the Merced Calzada de Sevilla with the commission to make twenty-two paintings on the life of San Pedro Nolasco, founder of the order. The set is today scattered between the Cathedral of Seville, the Prado Museum and foreign collections. By prolonging the execution of these works, and perhaps to compensate for the delay, Zurbarán carried out in the same years another series of canvases, also with the intervention of assistants, to the library of the same convent. It consisted of twelve portraits of theologians and scholars of the order, some already deceased, whose intention was to perpetuate his memory. Five paintings of this series were confiscated by Godoy in 1802, becoming part of the collection of the Academy in 1816.

The four friars preserved in the Royal Academy of Fine Arts of San Fernando have a similar composition. The apparent uniformity is nuanced by the different orientation of the figures, by the variety in the arrangement of the hands and by the range of tonalities that make these paintings an authentic symphony of whites.

Fray Pedro Machado carries, like the other Mercedarians, the shield of the order with the emblems granted in 1218 to the founder San Pedro Nolasco: the bars of Aragón, which Jaime I granted him, and the white cross of the cathedral of Barcelona.

The essential thing was the figure and name of all of them as an example to follow in the conventual community, and the physical resemblance in these cases was a secondary matter.
Read moreRead less
Within: