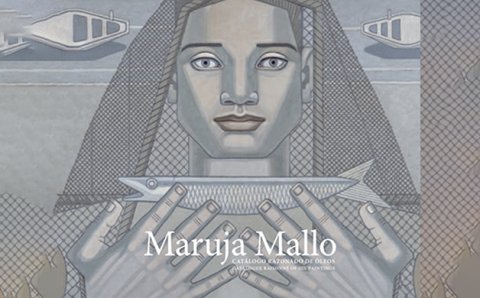 Maruja Mallo (Viveiro, Lugo, 1902-Madrid, 1995) is considered a key artist in the Reina Sofía Museum Collection. She represents the generation of 27, surrealism and the poetics of exile, she knew how to understand popular culture in an exceptional way and uniquely represented feminism in the first vanguards.

This meeting presents the raison d'être of oil paintings of the whole of her artistic production. The project is organized by the Reina Sofía Museum, the Azcona Foundation, the Guillermo de Osma Gallery, with the collaboration of Acción Cultural Española. The book brings together a good part of the most outstanding specialists who have worked on its production, such as Estrella de Diego, Guillermo de Osma and Juan Pérez de Ayala, who have participated in the publication together with Antonio Gómez Conde, Antonio Bonet Correa, Fernando Huici March and José Carlos Valle.

The reasoned catalog establishes the pictorial production of Maruja Mallo in 147 paintings and 40 sketches, among which are some unpublished works of her, constituting the first important corpus dedicated to her work. Despite the fact that Mallo represents one of the most luminous stages of the Spanish culture of the 20th century, his figure had been submerged in a long shadow, -after his 25-year exile due to the Civil War and the Franco regime-, which is publication contributes to alleviate.

Ladislao Azcona, president of the Azcona Foundation, a non-profit organization that has sponsored and published the reasoned catalogs of great figures of 20th century Spanish contemporary art, such as Martín Chirino, Manolo Millares, Manuel Rivera, Luis Fernández and Julio González.

Estrella de Diego, art historian. She is a professor at the Complutense University of Madrid and a full-time academic at the San Fernando Academy of Fine Arts. Among her abundant publications in this field, Maruja Mallo stands out (Mapfre, 2008).

Ángeles González-Sinde, president of the Board of Trustees of the Reina Sofía Museum.