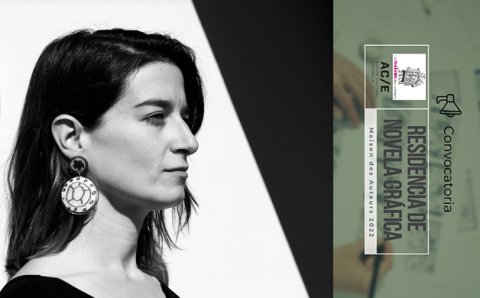 The comic artist and illustrator Bea Lema is the resident for this 2022 edition of the graphic novel residency at the Maison des Auteurs with the project “The body of Christ”. The work aims to delve into the consequences of childhood traumas in adulthood, as well as in the search for relationships between mental illness, child abuse and unprocessed internal pain. As the protagonist grows, she begins to investigate the mother's medical report and family history, discovering her grandfather was an abuser. At the same time, the girl assumes a caring role, which neither her father nor her older brother seem willing to play, that is to become the mother of her own mother.

The residency is organized by Acción Cultural Española (AC/E) and the Cité internationale de la bande dessinée et de l’image, with the collaboration of the French Embassy in Spain. The residency takes place at La Maison des Auteurs de Angoulême (France) for six months, between January and June 2022.

Bea Lema trained as a product designer at the University of A Coruña. She began her professional career in 2010 working for the Sargadelos ceramic firm. Since 2013 he has been developing his work independently, carrying out projects for the Madrid Choreography Contest, O Salto Galiza, Out of Margin, Unitaria, Nave 1839, Municipal Libraries of Coruña, Galician Council of Cooperatives, Cidade da Cultura de Galicia or the Concello de Santiago de Compostela. In 2017 she received the XII Award for Banda Deseñada Castelao from the Diputación de A Coruña with “O Corpo de Cristo”. The work is her first graphic novel, an autobiographical project that deals with mental illness from the perspective of a young girl.

ANNOUNCEMENT
- Presentation of applications: Extended until September 12, 2021.
- Publication of results: as of November 22, 2021 on this website.
- See conditions >
- Download the application form >
- More information: residenciasliteratura@accioncultural.es