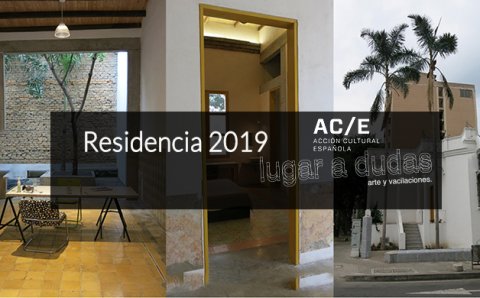 This is the third edition of these residences jointly organized by Lugar a Dudas and Acción Cultural Española (AC/E), at the jury selected the Spanish curator Marta Ramos-Yzquierdo to carry out a research work for six weeks in Cali.

Lugar a dudas is an independent non-profit space which promotes and disseminates contemporary artistic creation through a process of research, production and open discussion. Its programme of residencies, started up in 2006, is aimed at artists, curators, writers and other agents in the field of art who wish to explore and examine different forms of interaction that promote collaboration between individuals, disciplines and subjectivities as a starting point for artistic practice and critical thought.
OPEN CALL ANNOUNCEMENT
Finished on July 14, 2019.

Beneficiaries
All persons born or residing in Spain with a proven track record of research and who present a research proposal that requires their development in an institution such as Lugar a Dudas in Colombia may participate in the call.

Duration
The duration of the residence will be of 6 uninterrupted weeks, to choose between October and December 2019, and will be subject to the availability of Place to Doubts. In the event of absences during the agreed dates without relevant justification, it may suppose the cancellation of the stay and of the aids granted in each case, including the refund of the amount of the Spain / Colombia / Spain plane ticket.
Within the proposal submitted to the selection, short stays can be contemplated in other Colombian institutions / centers in Medellín, Bogotá, etc. that are considered of interest for the development of the investigation. Lugar a Dudas may advise on which centers may be of interest for the purpose marked in the submitted research project.

Submission of applications
Registration will be made by sending emails to the address: residencias@lugaradudas.org
They must attach the following documentation in a single PDF document (maximum 10 MEGAS):
1. Personal information // - Full name // - Date of birth // - Nationality // - Passport number // - Current address // - Mobile phone number // - E-mail // - Website
2. Portfolio: Brief description of the work you have done during the last three years. It is recommended to include the images in the PDF document.
3. Curriculum Vitae.
4. A letter of motivation that summarizes the interest for which you want to carry out residency in Place a Question and the objective of the research you want to develop or complement during your residency: What would this context contribute to the process of your practice? What relationship would you expect to establish between one and the other?
5. It will be valued that two reference letters of qualified people who know the artistic trajectory of the participant be attached.
The applicants accredit the originality and authorship of the projects that they present and guarantee that they legitimately hold all the intellectual property rights over them, expressly exempting the institutions that call this residence from any liability for damages that may be caused in this respect. .

Deadlines
Applications may be submitted until 23:59 (GMT + 1) on July 14, 2019. No application received after the deadline will be accepted.
In August 2019 the name of the selected will be communicated on the conveners' websites.
The selected candidate will be contacted directly by the program coordinator and must confirm acceptance in writing within 7 working days of notification.

Selection
The candidatures will be valued by a commission composed of a minimum of three members of the convening institutions. The decision will be unappealable. The Valuation Commission will resolve any circumstance not foreseen in these bases and may declare the call void.
By the mere fact of presenting themselves to the call, the participants accept these rules. In the event that a previously awarded application must be withdrawn, the candidate must notify it in advance.

Endowment
The residence will be developed in the facilities of Lugar a Dudas, in Cali (Colombia) and includes the following services:
- Processing and payment of the round trip to Cali from the place of residence in Spain.
- Accommodation for six weeks in a single room with wi-fi, fan, private bathroom and work spaces. The room is located in the house "This is not a hotel", Barrio Granada, 100 meters from Lugar a Dudas.
- Medical insurance during the period of residence that must be managed and hired by the resident together with Lugar a Dudas, who will pay the amount thereof.
- For maintenance, an amount of 800 euros (its equivalent in pesos) is established, which will be delivered to the resident by LUGAR A DOUBT in the following manner:
- 550 euros (its equivalent in pesos) upon arrival in Cali.
- 250 euros (the equivalent in pesos) at the beginning of the last week of stay.
- Management and payment of transportation tickets and accommodation during internal trips in Colombia, in case the resident considers the convenience of making them for the development of their project and always having the advice and authorization of Lugar a dudas . These internal trips, their number, destination and duration, are limited, since it is considered that the primary objective is the residence in place of doubt.
- It will be provided that residents who wish to visit can visit the
Read moreRead less