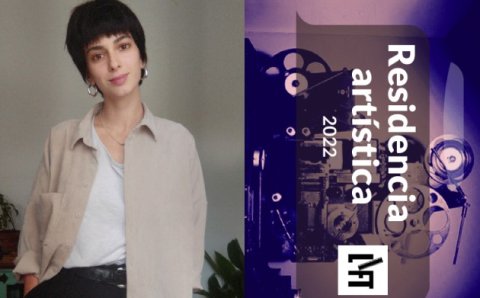 Laura Moreno Bueno has been selected as a resident at LIFT in this edition that lasts between 4 and 6 uninterrupted weeks to choose between mid-January and March 2022. S8) Mostra de Cinema Periférico y Acción Cultural Española (AC/E) Organize the International Artistic Residences of Cinematographic Creation - BAICC with the aim of continuing a line of work that seeks to open new paths for emerging creators, facilitating the creation of exchange ties with an institution of international relevance such as LIFT-Liaison of Independent Filmmakers.

Laura Moreno Bueno studied in Madrid, where she began her interest in the transfiguration of audiovisual codes from digital or analog media. In 2017 she made a video art installation that delves into the limits of the landscape. In 2018 she created the Biomas collective, a space to reflect on the relationship between the body and the camera. From the workshops carried out, she grows her interest in using the body as a form of communication. This same year she carries out "1b0", a collective project where she manages to unite visual and sound artists, who from the encoding and decoding of her works create audiovisual pieces. She also creates "The music of the walk", a sound installation in which, thanks to movement sensors, the spectators create sounds as she walks. In 2019 she is studying creation at Elías Querejeta Zine Eskola (San Sebastián), which allows her to follow her research on body representation and delve into analogical processes. She makes an audiovisual triptych about crying, where she looks for a way to represent tears based on movement and installation. In 2021 the project "The sound of images" begins, where, thanks to the Hangar-Casa Velázquez collaboration residence, it manufactures photosensitive microphones that convert light into sound, the result is an installation where, from previously treated 16mm film, the images are translated into sounds and generate a synaesthetic experience.

All the information here >

15 March 2022
Join us online on Thursday, March 24, 2022 at 6:00pm ET to see a presentation by the Spanish filmmaker Laura Moreno Bueno. This presentation follows shortly after her residency in the fifth edition of the BAICC Residencias Artísticas Internacionales de Creacion Cinematográfica, a collaboration between the (S8) Mostra Internacional de Cinema Periférico, Acción Cultural Española (AC/E) and the Liaison of Independent Filmmakers of Toronto (LIFT).
Leer

17 February 2022
The Liaison of Independent Filmmakers of Toronto (LIFT) is pleased to welcome Spanish filmmaker Laura Moreno Bueno as the current resident in the fifth edition of the BAICC Residencias Artísticas Internacionales de Creacion Cinematográfica, a collaboration between the (S8) Mostra Internacional de Cinema Periférico, Acción Cultural Española (AC/E) and LIFT. The residency supports the making of a new analogue film-based work by creators born or living in Spain. The work made in the residency will premiere at the next iteration of the S8 Film Festival, held from May 27 to June 5, 2022 in A Coruña, Spain.
Leer