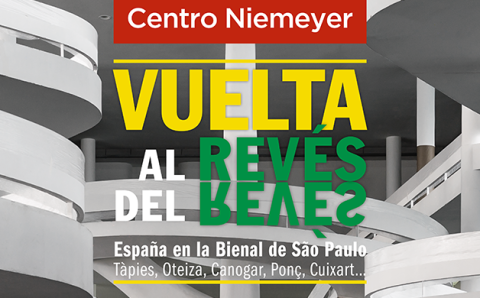 Turn upside down inside out. Spain at the São Paulo Biennial

On the occasion of the celebrations for the Bicentennial of the Independence of Brazil, the Niemeyer Center organizes at its headquarters in Avilés an exhibition that brings together the works of Spanish artists who have passed through the São Paulo Art Biennial over the past decades, the second exhibition of this type in importance worldwide after the one in Venice.

In it you can see creations by artists such as Antoni Tàpies, Jorge Oteiza, Rafael Canogar or Isabel Pons. In this way, the exhibition traces the Spanish participation in the biennial from its creation to the present, exhibiting the works that participated in the contest and that, in some cases, have not been shown in Spain because they remained in Brazil or passed into the hands of collectors.

AC/E supports this project, which seeks to strengthen the cultural relationship between Brazil and Spain, coinciding with the two hundredth anniversary of the independence of the American country, the country of origin of the architect who designed and gave his name to this cultural centre in Avilés.

Although Spain was absent from the first edition of the São Paulo Biennial, held in 1951, its participation became common in successive calls, becoming an unbeatable opportunity to make the most current Spanish art internationally known. In 1957, Jorge Oteiza won the First Prize for Sculpture; in 1959, Modest Cuixart won the award for painting, in 1963, César Olmos won the award for engraving, and in 1965, Joan Ponç won the award for painting. Then came the Rafael Canogar Grand Prix (1971), Miguel Berrocal and Darío Villalba in 1973, and José Luis Verdes in the following edition.