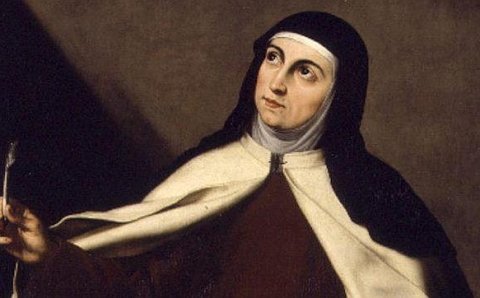 5th Centenary of the birth of Saint Teresa of Ávila

Commemorations
01 January - 31 December 2015
The 5th Centenary of the birth of Saint Teresa of Ávila is due to be celebrated in March 2015. To mark this event, Acción Cultural Española is taking part in several exhibition and cultural projects which, in addition to examining episodes in her life, analyse her literature and her influence on subsequent writers and artists.

Teresa de Cepeda y Ahumada, who is better known as Saint Teresa of Jesus or simply Teresa of  Ávila (Gotarrendura or Ávila, 28 March 1515 – Alba de Tormes, 4 October 1582), was a Spanish mystic, writer and nun who founded the Discalced Carmelites, a branch of the Order of Our Lady of Mount Carmel (or Carmelites) and a doctor of the Catholic church. Together with Saint John of the Cross, Saint Teresa is regarded as the foremost representative of Christian experimental mysticism and one of the great masters of spiritual life in the history of the church.

The oeuvre of Saint Teresa reflects simultaneously or consecutively the experiences of a passionate mysticism, such as that which pervades El castillo interior o las moradas (trans. The Interior Castle or The Mansions) and the harsh everyday activity reflected in the Libro de la vida (trans. Book of Her Life); the ecstasies or  raptures of Camino de perfección (trans. Way of Perfection) and Conceptos del amor de Dios (trans. Conceptions of the Love of God); and the succinctness of the worldly matters of the Libro de las constituciones (trans. The Constitutions), which can also be seen in the closed organisational structure of the new convents set out in the Libro de las fundaciones (trans. The Book of Her Foundations). Her life marked a whole era, because she defended women’s right to develop their own personality in a world dominated by men and convinced her best contemporaries of this undertaking: Fray Luis de León, Saint John of the Cross, Saint Francis Borgia, Fray Juan de Ávila, the father and professor Domingo Báñez, the inquisitor Quiroga..., and even Philip II. And despite scorn and insults, she travelled around Spain with the same initial spirit and renewed hope.

Teresa de Jesús. The Proof of my Truth

March 2015 marked the 5th centenary of the birth of Saint Teresa of Ávila. To celebrate this event, Acción Cultural Española and the national library in Madrid (Biblioteca Nacional de España) organised a biographical exhibition on the saint. The show examined episodes in her life and analysed her literature and influence on subsequent writers through more than a hundred items, including
View Activity

Fear Nothing, She Says

Organised in connection with the 5th Centenary of the Birth of Saint Teresa of Jesus, the aim of this exhibition is to explore the meaning of spiritual searches at the onset of the third millennium, establishing the need to find their common anthropological thread and endorsing their connection with creative languages.   The exhibition title Fear Nothing, She Says. When Art Reveals Mystic
View Activity