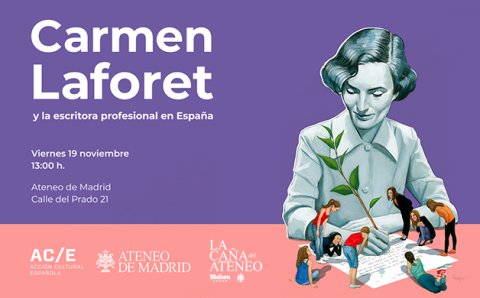 THE CAÑA OF ATENEO BY MAHOU
In the post-war era, Carmen Laforet inaugurated a new way of telling the world through words and a new look. Obtaining the I Nadal Prize for her novel Nada, made her a mirror for many other writers who, encouraged by her talent and achievements, decided to imitate her and take up the pen to tell life from that new window, that new voice, that new perspective. . Carmen Laforet paved the way, began the path that many other authors followed until the full culmination of women as professional writers, which came at the end of the 20th century and the beginning of the 21st.

With the aim of drawing bridges between Carmen Laforet's literature and current female writers, we will talk about literature, about the networks that are established between writers of different generations, about the debates (old and current) around feminist and feminist literature, and on the imprint that Carmen Laforet's work has had on women writers of the present. We will talk about all this with four great authors: Rosa Montero, Soledad Puértolas, Juana Salabert and Marta Sanz. Likewise, an act of "poetic justice" will be held with the inauguration and location of the portrait of Carmen Laforet drawn by Francesco Pistolesi in the Athenaeum's Portrait Gallery, which, until today, had only one woman among its illustrious characters: Emilia Pardo Bazán. Laforet was a member of the Madrid Athenaeum that she regularly frequented, a place that provided her with the space and calm necessary to write, among others, her debut opera.

All this in an act that wants to underline the importance and significance of Carmen Laforet in relation to the configuration and consolidation of the professional writer in Spain in the framework of the centenary of her birth.

Carmen Laforet and the professional writer in Spain 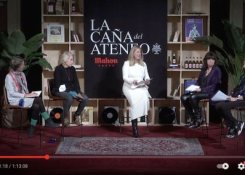