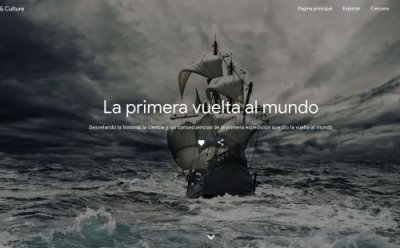 10 December 2020
On the occasion of the 500th anniversary of the First Round the World, Google Arts & Culture, in collaboration with the Ministry of Culture and Sports of Spain and the Spanish National Commission for the First Round the World, presents the project The first round the world, a digital portal that explores the details of the Magallanes-Elcano circumnavigation and its impact on the European understanding of the world.

For the first time, users from all over the world will be able to know details of the Magellan and Elcano expedition, dive among historical documents and maps, remember the route that the expedition followed or virtually visit the only ship that returned to Seville, the Nao Victoria . The exhibition is divided into different pillars that try to explain not only the naval adventure that lasted 3 years, but also the before and after, with consequences that continue to this day: The Expedition (the details of the trip: historical context, the protagonists key, etc); Exploration (maps, travel instruments, flora and fauna along the way ...); and the Transformation (consequences of the expedition: a spherical world interconnected through the oceans, cultural, social and commercial exchanges).

It is the first time that 12 leading cultural institutions from all over Spain have collaborated with Google Arts & Culture to put the details of this amazing maritime feat online. With just a few clicks of the mouse, users around the world can explore the details and consequences of the first round the world.
How has this project been carried out?
The project has been developed in close collaboration with the Ministry of Culture and Sports of Spain and the Spanish National Commission for the First Trip to the World, through the participation of these 12 cultural institutions:
● Spanish Cultural Action
● State Archives
● Elkano Fundazioa
● Nao Victoria Foundation
● Seville City Council
● Sanlúcar City Council
● National Museum of Natural Sciences
● National Museum of Anthropology
● Museum of America
● Naval Museum
● Museu Marítim de Barcelona
● Royal Academy of Gastronomy
About Google Arts & Culture
Google Arts & Culture was born in 2011 and is Google's initiative that makes more than 2,000 cultural institutions around the world available to everyone in order to offer the possibility of closely exploring the art, history and wonders of the world. world. Discover stories of our cultural heritage, from the Bauhaus school or the movement for women's rights to ancient Mayan temples, Spanish gastronomy or Indian railways. Google Arts & Culture is available for free as a website and as an app for iOS and Android. You can read about our latest projects on the official Google blog.