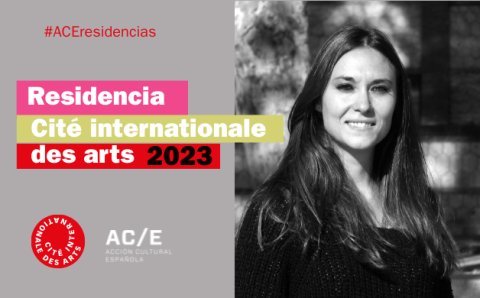 The winners of the crossed residence of the Cité des Arts are the Spanish Florencia del Campo with the project "Dicha" and the French Marine Cosnay with her project "Des îles (Lesbos 2020-Canaries 2021)". "Dicha" is an autofiction project, with which Florencia already experimented in her previous book "Madre mia", and in which this time she also wants to incorporate an essayistic tone that allows for a hybrid between autofiction and essay of the self, that is to say , a crossing of the biographical not only with fiction but also with reflection and thought.

Florencia del Campo is an Editor from the University of Buenos Aires and also studied Literature and Cinema. Her first novel published in Spain is titled “La huesped” (Base Editorial, 2016). With it, the author was a finalist for the 2014 Short Novel Equis Award. A year later she published "Madre mía" (Caballo de Troya, 2017). In 2019 she was the winner of the City of Barbastro International Novel Award with “La version extranjera” (Pretexts, 2019). In 2020, her first collection of poems was published, “Mis hijas ajenas”, after winning the La Bolsa de Pipas Award from Editorial Sloper; That same year she published her first youth novel: “Soy” (Editorial Barrett, 2020). She also teaches creative writing workshops and coordinates various reading clubs in town halls and municipal libraries in the Community of Madrid.

The residency programme is organized by Acción Cultural Española (AC/E), the French Embassy / French Institute in Spain and the Marie de Paris, with the support and participation of the Residencia de Estudiantes in Madrid and the Cité internationale des arts in Paris for the promotion of the exchange of French and Spanish writers. In addition, this programme aims to create collaboration networks, promote the mobility of national creators abroad, promote creative production by offering residencies for creators and strengthen links between cultural institutions in France and Spain.

The residency lasts two months, is open to writers residing in Spain and can be enjoyed between January and February 2023, at the Cité Des Arts, in Paris.

Staying at the Cité