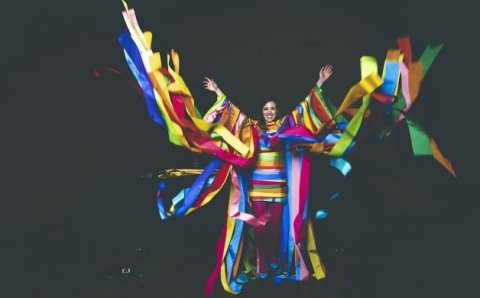 The pianist Andrea González recovers the music of the Spanish monk Rosendo Salvado (Tui, 1814 - Rome, 1900), founder of the only monastic city in Australia and a pioneer in the defense of human rights of the aborigines. An eclectic character who negotiated with kings and popes, he lived with indigenous tribes and considered music the epicenter of his mission.

This show presents the figure of Rosendo Salvado through his music and life with the piano performance of Andrea González accompanied in two numbers by the soprano Leonor Bonilla.

Andrea González, chosen among the Top 100 Women Leaders in Spain, has performed in auditoriums such as the Milton Court Concert Hall in London, the National Theater in Havana, the Amici del Loggione room at the Teatro alla Scala in Milan or the Australian National University. She teaches masterclasses and is a judge of piano competitions such as Orbetello Piano Competition, Great Masters Piano Competition or Santa Cecilia International Competition in Porto.

In the field of music management, she is the founder and director of the International Keyboard Festival & Masterclass (IKFEM Festival) of the Eurociudad Tui-Valença and Vice-president of Juventudes Musicales de España. In 2021, she presented the album with Rosendo Salvado's piano compositions for the Warner Music label with the collaborations of the soprano Leonor Bonilla and the designer Agatha Ruiz de la Prada.

Leonor Bonilla, winner of the Opera XXI Award for the best young singer, has received numerous awards. His successes with Marina at the Teatro de la Zarzuela, Contessa de Folleville at Il Viaggio a Reims at the Gran Teatre del Liceu, the Gala held on the occasion of the Tenor Viñas 2018 Competition at the Teatro Real or Lucia di Lammermoor at the Teatro de la Maestranza, among many others. She makes her international debut in Italy, Germany, Japan and Switzerland with some roles such as Nanetta de Falstaff, Gilda de Rigoletto or Doña Francisquita.